To Bronty Bridge and Beyond 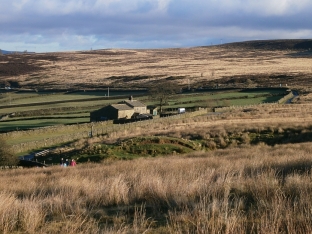 Looking Back Along the Bronty Way

The whole point of this walk apart from the exercise and pleasant surroundings, was to collect some material for painting Bronty Bridge and perhaps the old ruins at Top Withens together with anything else that looked like it might make a painting. The trees round about looked promising and there were some nice farms as well. We started off from Penistone Hill just after 10.30. It was a lovely January day but there was a bitter cold westerly wind. I believe, according to the weather forecasters, that it was due to that polar vortex that was freezing North America and the jet stream was sharing a bit of it with us. It was so cold I had to wear three layers of gloves to get my hands warm after putting my boots on!! Also well togged up with wind-proof clothing and such we were well equipped to cope with anything. 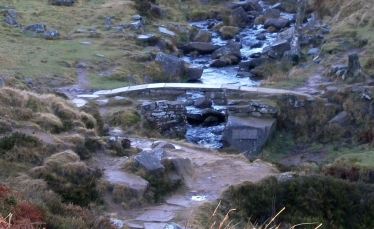 The walk took us across Haworth moor and along the Bronty Way, a pleasant walk, down to Bronty Bridge. Well that is when disappointment struck, instead of what should have been a very old rustic stone bridge, there appeared spanning the brook something that I had not expected to see – a quite modern looking bridge. On closer inspection it turned out that the original rustic bridge had been washed away in a flash flood and this was the repaired version. I think we can make it a little more rustic if we paint a picture of it but it will never be the same as the old structure. On the whole I suspect the whole place would look more cheerful in the summer when lit by the sun as not a lot of light managed to find its way into the steep sided valley, which encloses the brook, seeing as it was January. 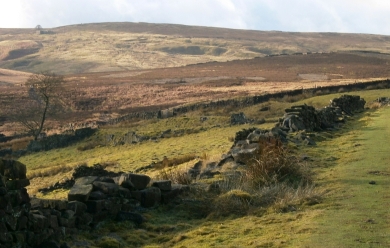 Well moving on we climbed out of the gloom into the sun on the north side of South Dean Beck and headed off towards the ruins at Far Withens. (this structure can be seen top left of the photo with a tree sticking out the back) As the footpath begins to drop back down towards South Dean Beck you pass a standing stone to the right. this is one of the Cuckoo Stones reputed to be the petrified remains of a local giant that terrified the locals with his robbing and such. He got his comeuppance and was killed but turned himself into stone before he finally pegged it and before they could chop off his head. Now this was a crafty trick as he could also turn himself back when he had recovered from his wounds if he wished but not without his head. So they chopped off the top of the stone. Now the really weird thing is that both of the Cuckoo stones have had their tops chopped off at sometime so it seems no one was sure which one was the giant. It is very interesting when myth can be witnessed in a physical form re the damage to the stones. 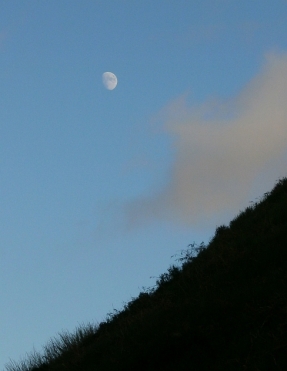 From the Cuckoo stones the path continues to drop before it rises again up the slopes of Delf Hill and finally to Top Withens. Some nice stones here abouts and the return was made back down the Pennine way which is paved for quite a bit of the way across the moors. Got some good photos of winter trees as well. The Grouse were quite amazing too as apart from the normal grouse noises, which I am used to, they were also making quacking noises like a duck (honest!) I suspect this was part of their mating call but need to investigate further (investigated further and just think it is normal). We returned then back by Bronty Bridge and back down the Bronty Way where the evening light was just sublime with an amazing moonrise over Haworth Moor. 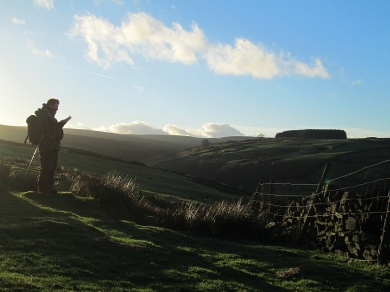 The closing photograph shows a view back over the walk from the side of the Bronty Way. The evening light shows the amazing qualities that English artists have valued for years, which is the milkiness of the setting as though a thin coat of white had been layered across the scene. Well time to go and here is where I will leave you as I head back towards the car and home.

Like Loading...
This entry was posted in The Ramblings of an Artist and tagged Bronty Bridge, Cuckoo Stones, South Dean Beck, Top Withens. Bookmark the permalink.